The German government is taking firs steps to partner with West African nations in the development of a hydrogen production. Federal education and research minister Anja Karliczek presented the “Green Hydrogen Potential Atlas" on Thursday, outlining the immense potential for a partnership between Germany and West Africa.
The research ministry is funding the joint H2 Atlas-Africa Project from 2020 to 2022 with around €5.7M. A feasibility study aims to identify suitable locations for green hydrogen production and carry out production, transport and processing tests.
The project will include the 15 Economic Community of West African States (ECOWAS). The initial results of the study show that three-quarters of West Africa’s land area is suitable for wind turbines and the electricity production costs are only about half of the comparable costs in Germany.
By using wind and solar energy, West Africa could produce up to 165,000 TWh of green hydrogen annually, 120,000 of which could already be produced for less than €2.50/kg.

Fortum said in a Press Release that it has signed an agreement to sell a majority share of its carbon removal startup Puro.earth to Nasdaq. Puro Earth is the first marketplace to offer carbon removal from the atmosphere that is verifiable and tradable through an open, online platform. Fortum will continue to own a minority stake in the business. 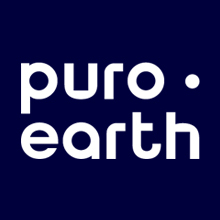